A Bit of A Review

Better fasten your seat belts because this could be a long one - I'm thinking back on the past year and reflecting on so many lessons... 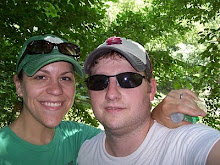 Mary Ann
I was born and raised right here in Indiana with the corn and Indy cars. I came to know the Lord Jesus as my personal Savior my sophomore year at Northland International University and I am daily striving to do His will. I am married to my best friend & we are happily enjoying married life. I'm currently unemployed after being downsized out of my job as a Nuclear Pharmacy Technician. I'm trying to navigate the job-searching waters for the first time in ten years - yikes! I'm not a foodie or a photographer or a brilliant bargain hunter; I'm just me & I have plenty of stories to tell, lessons to share, & tons of iphone pics to post!

The Friends Who Publicly Admit To Being My Friend